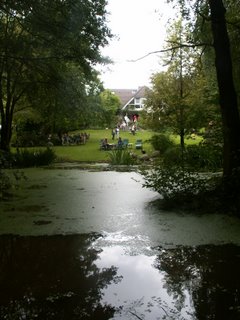 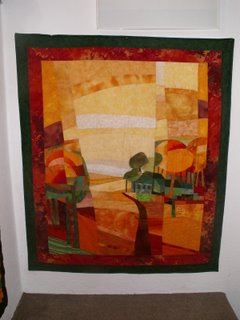 Unfortunatly the weather hasn't been ideal :-( So only 7 quilts made it into the garden instead of 80. It rained the whole time until the exhibition began, the sky looked still rainy - so the shopowner decided to show only quilts inside. She owns a spectacular garden. All the fabrics was 25% discount and a lot of extra offers for only 4 Euros. You will see some impressions now 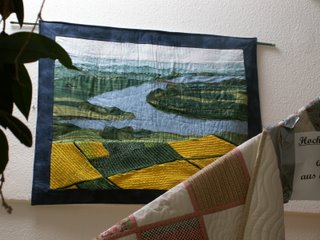 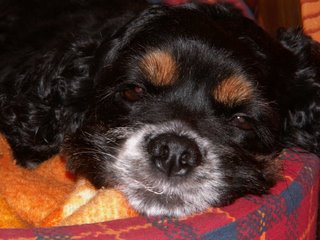 BTW: I have to represent my beloved American Cocker lady "Nelli".
She is always where I am!
isn't she a BEAUTY ?? 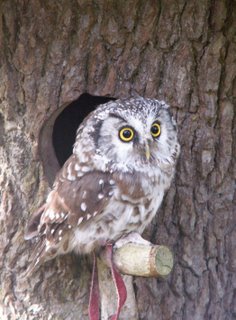 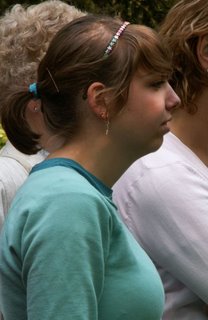 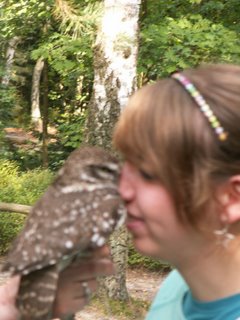 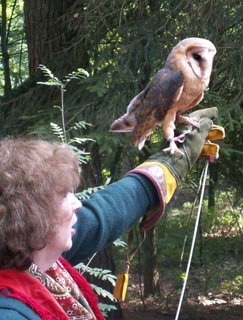 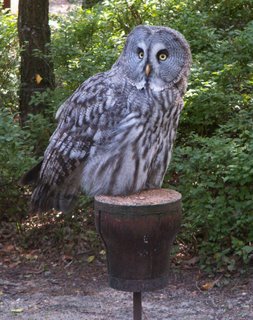 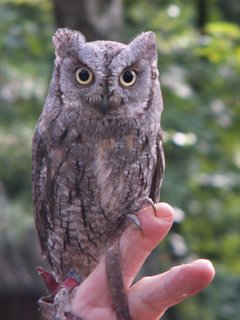 My daughter Ines (18) and I had an exciting experience yesterday. We visited the Eulengarten Bispingen, the owner told us about the ~ 40 different personalities. She spoke about their food and weight and made a lot of jokes, versy special lady :-) I'll show you some of the birds;
Posted by Brigitte at 21:10 No comments: 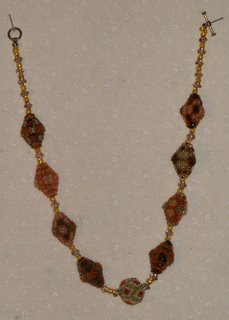 Instead of getting ready to start to my weekend trip I finished this little necklace. Of course the beaded beads had been ready before (smile). I'm not really lucky with the result, because it is to short and I feel the middle (focus) bead doesn't get the attention she due. She is a special beauty, which took much more time to make than I expected.
Posted by Brigitte at 11:33 5 comments: 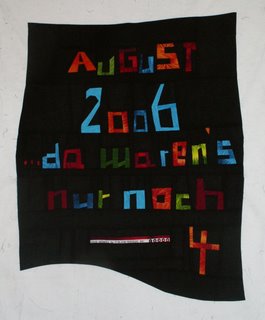 "trial and error" is the system I'm playing with .....
BUT I got it. Luck or knowledge? nobody knows

This is actually my first step into the world of fabric letters. A memory quilt on the occasion of the moving from Brigitte, the leaving 5th member of our group. It says: now we are only 4. I added the selvage of the fabric

As I said, the next project will be posted next week.
Posted by Brigitte at 17:35 4 comments:

Firstable I have to thank Tonya Ricucci, http://lazygalquilting.blogspot.com/ for her ecouragement! After lurking into several blogs she was the person who told me to start my own.

I visited her, Bonnie's and Hanne's blog daily and thought of writing my daily sermon :-)
After doing my first steps in "writing" fabric words with the help of Tonya's fantastic tutorials
I did two projects. I'll tell you the story behind my first step into this new dimension.

At least it was Pat Sloan's appeal to add words to quilts. She is doing it with applique or embroidery. My Halloween Round Robin is just back from the American ladies, I met last November at the Dear Jane Retreat in Shipshewana, Indiana - I'll post the picture later.
It is asking for words in my mind.
But I was afraid to ruin this gorgeous quilt with nice memories. So I decided to practise at another project.
At this time we had been ready to give a groupquilt to a leaving friend of our small, private group of 5. We made a Drunkhard's Path for her and splitted the leftovers "correctly". I'm shure everybody knows how difficulty that could be - smile.
As a reminicense of a German fairy-tale/children rhyme: "zehn kleine Negerlein" ???
I created my first letter quilttop.
The story is telling from ten little black children going through several accidents and something happend to the first - and after that they are only nine ............ and so on, you got it?

The second word has to be a secret until next week, because I want to surprise my friend Monica. My daughter Ines and I are visiting her this weekend to see a local quiltshow. You'll read more about this event at the beginning of the week.

Thank you once more Tonya and Pat! 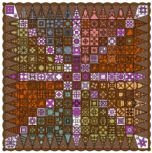